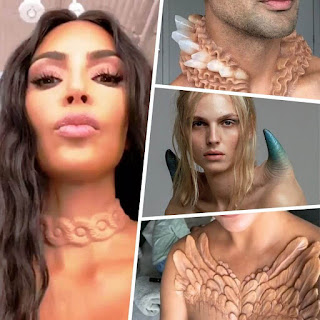 Kim Kardashian showed off that she has had a glowing necklace implanted beneath her skin. She revealed in her last Stories, showing that it glows when she talks, which is pretty much terrific. Probably, it’s not an under-the-skin implant as Kim Kardashian wouldn’t go that crazy. But, who knows…

Say what?! @KimKardashian shows off “alien necklace implant” that lights up to the rhythm of her heartbeat. The temporary piece is part of an art experience called ‘A. Human’ founded by her friend @SimonHuck. pic.twitter.com/mTcA12khA9
— Pop Crave (@PopCrave) August 27, 2018

Simon Huck invited not only Kim Kardashian to promote his crazy implants – Chrissy Teigen showed a set of skin feathers growing from her chest, resembling some kind of Devil May Cry character.
Fortunately, this one also seems fake, and Teigen will be to get rid of that.

Tan France and The Tudor

Queer Eye star Tan France appeared on the pic with so-called The Tudor, which is a living piece of skin with bioreactive crystals.
“When you think of the future, you think dark, dystopian—there are all these images that come to mind. I didn’t want to create a utopian world, but I definitely wanted to create a world that was optimistic or, at the bare minimum, neutral,” Simon Huck told Vogue. “We wanted to use the future of fashion and the future of self-expression as a way to look at the future. That is how the ethos of A. Human formed.”

The winner of the show is a transgender supermodel Andreja Pejic, who appeared to have the horn-sculpted shoulders “The Pinnacle”. This piece of art was done not by Simon Huck alone, but in a collaboration with designer Nicola Formichetti – a Lady Gaga’s former creative director.
“Fashion is more than the clothes you wear, it’s also the choices you make about your body and how you present yourself,” says Formichetti, “I like pushing the boundaries of what can be considered fashion and finding the edge of self-expression. My inspiration was a lot of imagery drawn from sci-fi and fantasy drawings of things that aren’t quite human. Aliens and robots are disquieting because they look humanoid but the details and proportions are different.”

For $40 you can see the exhibition of futuristic human body parts and innovations in bioreactive items.

Most of his creation Simon does to make people talk about it, “Yes, sharable content is important, but there is also a desire to go to something that makes you ask questions when you go out the door,” he says.
Celebrities