Mystery Woman Who Rang Doorbell and Then Disappeared Was The Victim Of Abusive, Suicidal Boyfriend (Creepy Video Inside) 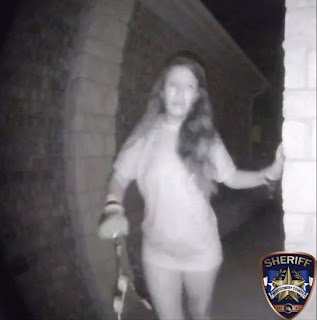 A victim of a suicidal boyfriend

A Texas woman who rang the doorbell of Texas homes in the dead of night on Friday is reportedly safe.
The video, captured by a homeowner’s Ring doorbell camera, traveled across social media after it was posted by the Montgomery County Sheriff’s Office. The woman was knocking on doors around 3 a.m. on Aug. 24, partially dressed and dragging wrist restraints but then vanished.
Deputies went door to door and asked the public for information. But no one knew who she was, and she didn’t match any reported missing persons.

On Wednesday, Montgomery County Lt. Scott Spencer told reporters that the woman had been identified, and she was safe with family members. But, he said, she had been the victim of an abusive boyfriend who apparently went on to kill himself.
On Tuesday, local police received information that a man in the area was threatening to kill himself. After arriving to his house, sheriff’s deputies found a dead body of 49-year-old man who was killed by a gunshot. Investigators believe it was self-inflicted.The man left a note at the scene in which he referenced his girlfriend, Spencer added, and investigators found out he had been living in the home with a 32-year-old woman. She wasn’t there, but deputies confirmed that she was the woman in the surveillance video and that she was safe with family members elsewhere in the state.

Police in Texas are searching for a mystery woman who rang the doorbell of a Texas home in the dead of night on Friday, partially dressed and wearing what appeared to be broken restraints on both wrists.
According to the Montgomery County Sheriff’s Office, the woman approached a home in the Sunrise Ranch subdivision the past Friday at about 3:20 A.M. and rang the doorbell.
The woman was captured on the surveillance camera of the house she rang in the Sunrise Ranch area of Montgomery, Texas, the Sheriff’s Office said.

The unidentified resident reviewed the surveillance footage from a private security system and sent it to the sheriff’s office. In the brief video, the woman appears to be wearing only a T-shirt, and is barefoot.
In addition, it’s reported that she has what might be broken restraints on her wrists, although others think the objects may just be bracelets or lanyards. Police have not commented on what they believe the wrist items might be.
The resident was awakened by the bell, but the woman was gone by the time the resident opened the door, said Lt. Scott Spencer, whose department has circulated the video.
Investigators are hoping to find her identity and determine whether she’s been reported as missing.

Lieutenant Scott Spencer said that, since the video was released to social media over the weekend, “numerous citizens” have contacted the sheriff’s office with flyers suggesting a woman is a missing person, possibly from Canada.
Spencer did not want to speculate on the situation or even confirm that the items wrapped around the woman’s wrists look like restraints. The investigation is ongoing, he said, and “there’s still a lot to be done.”
Anyone with information about the woman in the video is urged to contact the Montgomery County Sheriff’s Office at 936-760-5800 and refer to case No. 18A243347.
trending