“How do you like it, Elon Musk?” Memes: Russians Mock Musk on Twitter with Dozens of Terrible Life Hack Inventions 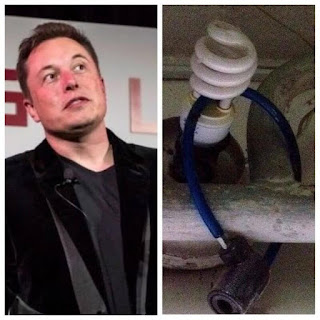 Seems that Elon Musk is the brightest star when it’s coming to meme creatins – first it was Grimes, then Azealia Banks, and now Russian Twitter has been roasting the Tesla CEO with these truly incredible memes.
The idea of the memes are simple – you just have to demonstrate a “super bootleggy lifehacky” invention, captioning with “and how do you like this, Elon Musk?”.

Honestly saying there’s nothing safe in those inventions but they are so damn funny and clever.

“Potholes on Kaluga roads covered with grass. How do you like it, Elon Musk?”
The hype started earlier this year but gained popularity when Musk sent his Tesla into space in February.

“Our response to Musk.”
Memepedia.ru  — the Russian equivalent to Know Your Meme —  says @StalinGulag started the meme last year when they tweeted a fake news screenshot that said scientists at the Budker Institute of Nuclear Physics started using the particle accelerator to smoke herring.

“The door to our dorm kitchen is being held by THIS. So, Elon Musk, do you feel the threat?”

“What do you think, Elon Musk?”

This person repaired their broken zipper with a paper clip. “How do you like this invention, Elon Musk?”
Tech