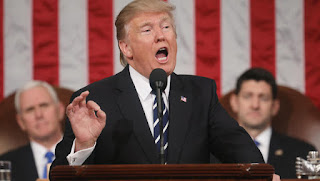 Here's what to expect:

* Trump will deliver his first State of the Union address tonight at 9 p.m. EST, and his spokesperson said it will “obviously be must-watch TV.”
* You can watch it here and on BuzzFeed News’ Facebook page, where we’ll be hosting a show with analysis, the speech, and coverage of the planned protests outside. We’ll also update this post when the speech begins.
* It’s a highly anticipated speech, mostly because people are unsure what, exactly, Trump might say. But remember: Trump usually remains on script during big, ceremonial speeches, like the one he gave at Davos last week.
* The speech comes amid a ramping up of tensions in the Russia investigation. It was reported Trump ordered the firing of Robert Mueller, the special counsel investigating possible collusion between the Trump campaign and Russia. (Mueller remained in the job.) Press secretary Sarah Sanders wouldn’t say Monday if Trump will mention the investigation during the address.
* Sanders did say, “The theme of the address is ‘building a safe, strong, and proud America.’”
* First lady Melania Trump’s guests will include a welder, a family whose loved one was killed by the MS-13 gang, and a wounded soldier.
* US Rep. Joe Kennedy III invited a transgender soldier to attend. Trump does not believe transgender people should serve in the military.
* And Democratic senators have reportedly invited more than a dozen DREAMers, whose parents brought them to the US illegally as children. Their status is currently being debated in Washington.

Here's what people in Puerto Rico want to hear from Trump

Trump is talking about black people again, and one of his goals in this speech is to woo black Americans

“Somebody please inform Jay-Z that because of my policies,” he wrote Sunday morning, “Black Unemployment has just been reported to be at the LOWEST RATE EVER RECORDED!”
He’s been talking about these numbers in recent weeks — in Pennsylvania during a pseudo campaign stop, for instance. He’s tweeted about the black unemployment rate being “the lowest ever recorded” three other times this month alone. “New unemployment claims are near the lowest we've seen in almost half a century,” he reminded the global elite in Davos, “African-American unemployment reached the lowest rate ever recorded in the United States,” adding, “It's very heartwarming to see.” And it sounds likely that he’ll quote the same numbers (or a similar stat) at the State of the Union Tuesday — a senior administration official said Trump will “will make it clear that all groups are benefiting under his presidency.”
All of the unemployment talk fits squarely in the nationalist agenda that Trump and especially former adviser Steve Bannon tried to push: Black unemployment is at an all-time low and it’s because of Trump, so vote for him next time.
Can Trump actually win back black Americans? That seems to be the plan. The polling shows a lot of room for improvement: In their most recent polling sets, Pew put black approval of the president at 7%, while Gallup put it at 6%.
Read more here.
—Darren Sands

One of President Donald Trump’s fiercest critics on Capitol Hill will address the country just after Tuesday’s State of the Union.
Rep. Maxine Waters, a California Democrat, will speak at the top of a BET News special after Trump delivers the address, a BET spokesperson told BuzzFeed News. The program,Angela Rye’s State of the Union, is part of a broader partnership announced just days ago between the network and the Democratic strategist and political commentator. Rye will executive-produce news programs with a sharp focus on issues facing black Americans. The programs will run quarterly, BET said in a release.
The spokesperson said activists and some elected officials will analyze Trump’s first year in office on the program, and will talk about "building black politics and the value of engagement across today’s socio-political landscape."
BET News confirmed Friday that the special will air this Wednesday.
Read the full story here.
–Darren Sands

On Monday, some members of Congress attending the SOTU noticed that there was a little spelling error on their tickets. Part of the invite read, "State of the Uniom" — not "State of the Union."
("Visitor's" is also incorrect, per the Office of Art & Archives website.)
A spokesperson for the Office of the Sergeant at Arms, the nonpartisan office in charge of printing the tickets, confirmed that there was a "misprint" and that Senate staffers had corrected and reprinted the tickets, and are currently redistributing them.
Read the full story here.
–Brianna Sacks

The Congressional Black Caucus was considering earlier this month whether to boycott President Donald Trump's State of the Union address, but that's not the only option it had on the table.
Louisiana Rep. Cedric Richmond, the chair of the CBC, said on BuzzFeed News' AM to DMthat the caucus was looking at options including showing up at the State of the Union and walking out or holding a separate event at the same time.
"We will decide in that meeting and discuss how we want to respond to the president's State of the Union. We could go, we could go and walk out, we could go and hold up fists ... or we could not go, or we could hold our own State of the Union," Richmond, a Democrat, said. "So there's a million options we could do, but I think the most important part is to let people out there know that we're still here, we're still fighting, we really don't care what he thinks about us."
Read the full story here.
–Lissandra Villa

A trans soldier will be in attendance

A soldier who President Trump believes should not be allowed to serve in the military because she is transgender will be in the audience for the State of the Union address at the invitation of a Democratic lawmaker.
Rep. Joe Kennedy III, who is scheduled to deliver the Democratic Party's rebuttal speech from Massachusetts, invited Staff Sgt. Patricia King, 37, to attend the president's speech in the House Chamber.
Trump blindsided the Pentagon and top military officials last year when he declared on Twitter that he was banning transgender people from serving "in any capacity" in the military.
Read the full story here.